I was contacted via Twitter by an agent at Geek Squad (Matthew) who helped me determine that my camera is set to arrive at the Best Buy store tomorrow! What a relief! That was so nice of Matthew! I wish he wore polish... I'd send him some!

I have a couple random nail pics I could post, but nothing too exciting, so I am just going to put up a great pic I took in New York.

I went to a pool one day with my sisters and mom and saw a big fat bull frog relaxing by the pool. I started to take pics of him, and as he got ready to jump in the pool to get away from me, he sat for a moment looking out at the water and I was able to snap this: 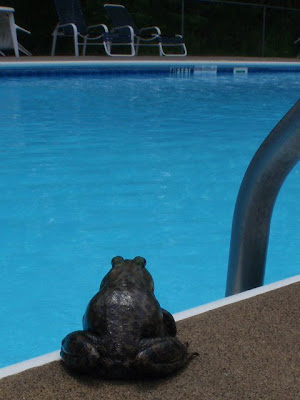 It's one of my favorite pictures! I did not give up on him either once he jumped in! Since I have a waterproof camera I went after him and took some pics under water too! He was so funny. I don't think I have ever seen a frog go swim in a pool. When he had enough, he climbed out via the latter and hopped away. He just wanted a dip like anyone else! He was a cool little (well, big) frog.
Posted by Lacquer Laine at 1:32 PM