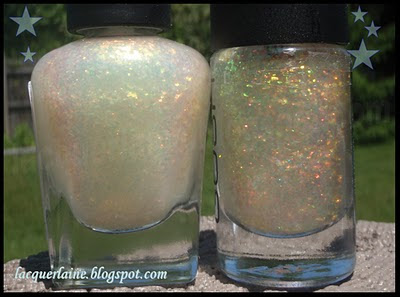 Sally Hansen - Hidden Treasure and Gosh - Rainbow
When I first started seeing swatches of the new hot drugstore release, Sally Hansen - Hidden Treasure, I started thinking that it looked just like a little gem I got from a friend overseas. It's by a brand called "Gosh" which is sold in Europe and Canada, and not to us US girls. I have showed you a little of what Gosh - Rainbow can do, and if you like what you saw and couldn't get it, I have good news. There are dupes! 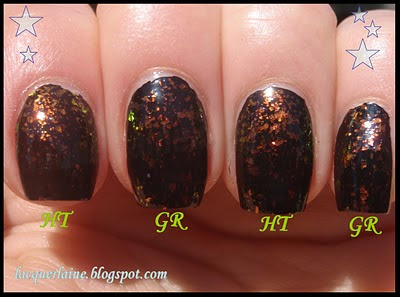 In sunlight, one coat layered over black:
Sally Hansen - Hidden Treasure (HT) on index and ring
Gosh - Rainbow (GR) on middle and pinky

In shade, one coat layered over black:
Sally Hansen - Hidden Treasure (HT) on index and ring
Gosh - Rainbow (GR) on middle and pinky 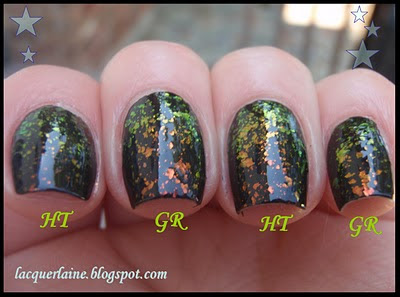 still one coat, just at an angle 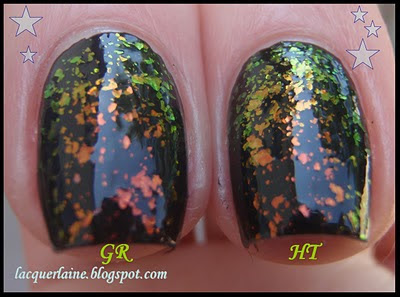 At first looking at the bottles they look much different, don't they? HT looks like it is more white and cloudy, while GR is crystal clear. HT looks like it flashes some more pastel shades, and GR look like a prism. But on the nail... they look the same. The photo directly above makes it look like HT may have a more dense coverage, but it is just based on those two nails. I had a lot on brush when I painted my ring finger, but you can see it is not as dense on the index. It was just a fluke. To me they flash the same colors, at the same angles, and have the same intensity and density.

So if you are not in the US and can't find HT, then you can get yourself Rainbow. If you can't get Rainbow in the US, you can get Hidden Treasure (maybe. It seems as though it's hard to spot!) and if you can't get either, it looks like a new release from Nubar is a twin too: Nubar - 2010

What do you think?
HAPPY FRIDAY!
:c)
-Elaine
Posted by Lacquer Laine at 7:22 AM