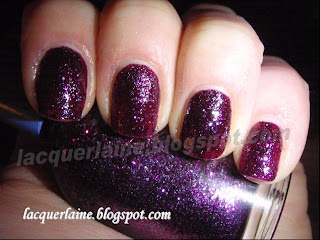 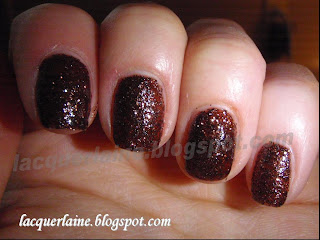 Hello! I have had a major lemming for Lippmann Collection-Superstar. I discovered it way after the holidays when it was too late to get it. So I was planning a franken. I found some brown glitter at Michael's, and it was in a sample pack of 16 different color glitters! So I thought I'd mix and match and have fun.

The first one, which I dubbed Racy Tracee, Was actually black and a pinkish red mixed into a black jelly base. But the colors sort of melted and mixed into a dark cherry color. Now that makes me a bit hesitant to mix together all sorts of colors cuz it might just melt and look like poo. And my Superstar dupe is alright. It doesn't seem to have the melt problem. I rather like it! I added a brown creme to clear polish to get a brown jelly base and added all the brown glitter!! It works, but this glitter all settles at the bottom. You just have to shake well before you use it. The particle size is nice though. It looks just the same size as the glitter in RBL's Frugalista and Locavore.
Posted by Lacquer Laine at 1:12 PM