I went digging in my friend's polish stash recently and discovered some great discontinued Sally Hansen glitters. And since I love glitters I had to try them! Unfortunately, two of the three were almost empty (and the two I wanted to try the most!) and they were pretty dried up. I threw in some polish reviver/thinner to at least get out enough for this swatch, but definitely couldn't get out enough for a full manicure. I thought it would be interesting to post them. Check out these bottles: 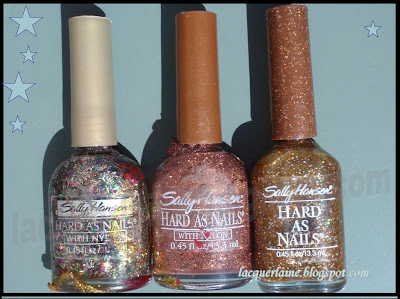 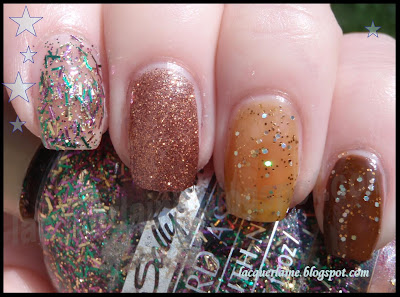 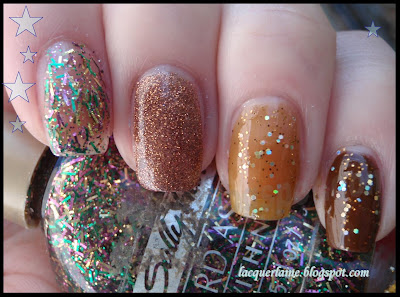 The swatches are: Celebrate, New Penny, Wired and Wired over Revlon-Chocolate Truffle. 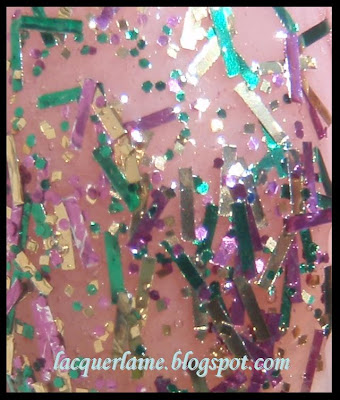 Celebrate is purple, green and gold round glitter and bar glitter. It's like Mardi Gras in a bottle. It is so fun! I wish this was still around.

New Penny is a small grain, but dense, copper/orange glitter. I really wish this was still around.

Wired is a translucent brown-yellow with small copper glitter and larger holo glitter. I am not a fan of it alone, but layered it's nice.

I wanted to say here "I wish that Sally Hansen would release interesting glitters like this," but we have just gotten some nice glitters, including one of my favorite glitters: Rockstar Pink. I am just such a nut for sparkle, and if I saw interesting mixtures like this in the drug store I would grab them up, no questions asked.

How old these are is a mystery. I don't really know when they came out/were discontinued. But perhaps if you hunt for them, you could find them somewhere. Some smaller independent beauty stores, or maybe ebay. If your like me, you're never scared of a little hard-to-find hunt!
Posted by Lacquer Laine at 9:45 PM