Happy Monday! How's the start to your week? Mine isn't the best, I have to admit, but I am smiling thanks to the mani I have on!

I have a wild and awesome mani for you today. I did it over the weekend and am stunned at it's depth. It has it all: it's blurple, it's flakie and it's shining every color possible at me. Why do I need to wear anything but this? :cP 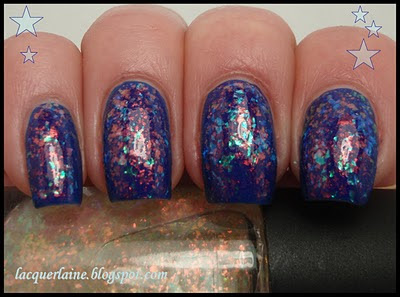 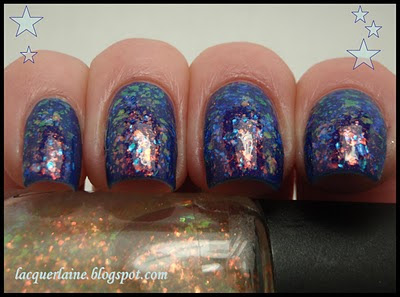 I started with a coat of Essie - Mesmerize. Then I added Nfu-Oh - #51. The sheer purple of #51 over the bold blue of Mesmerize created an electric blurple that is just perfect for this insane mani. 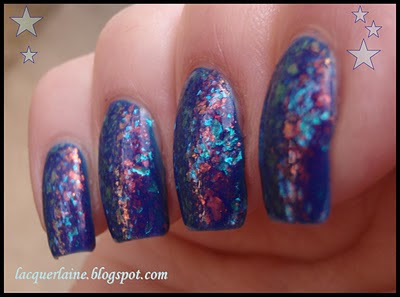 Then I threw on a great flakie I received from a sweet lady in Holland called "Rainbow" and it is from a line called "GOSH". I know GOSH is well known to my international readers but us fanatics in the US don't have access to it. The flakies in it are just like Nfu-Oh - #51 but the base is clear, making their "flakie-ness" shine a bit more than #51's. 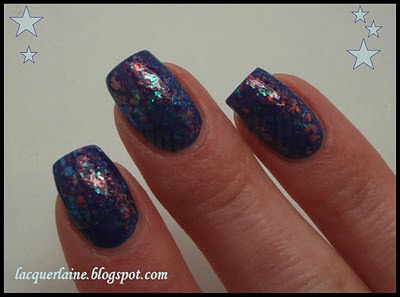 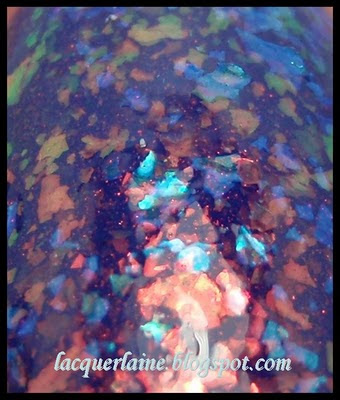 Then the kicker. I added Nfu-Oh - #40 on top which I showed you over black here. #40 is one of my favorite polishes ever. Alone it isn't that exciting, but layered... oh. How it kills layered. #40 is what really makes this creation because although the flakes in #51 and Rainbow are well, rainbow, you get the different colors when you move your nails and look at them from different angles. So straight on they show mostly red and orange, but straight on #40 looks blue, green and aquamarine, so you all colors at once without twisting your hands around. It's rather intense! 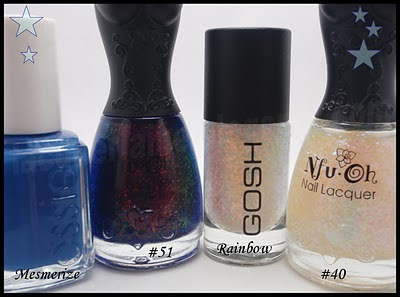 Let's give a round of applause to the crew that made this possible! Woo! Mesmerize, #51, Rainbow, #40.

Something to consider if you are in the market for some Nfu-Oh polishes!

What do you think? Do you rock layered looks?
:c)
Posted by Lacquer Laine at 1:40 PM