I was cruisin around on the internet, lookin for polish as usual, and discovered one of the coolest things I've ever seen... Water marbling. I found it on China Glaze's website. They call it 'Swirl Play'. I had a plan to do a marbling of a bright red and blue, to mimic what it's like when you get a slushie and you don't know which to get so you mix them both together! So I decided to test out water marbling with Color Club's Sexsea, and China Glaze's Carribean Blue. This is what I got: 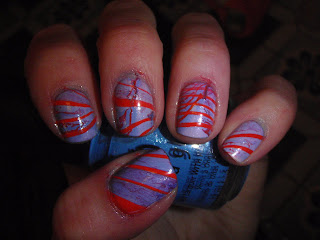 It's not quite what I had in mind. But still cool. The thumb looked a bit better: 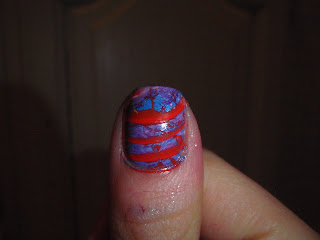 I then figured it would be nice to show some step-by-step of what I did. So I picked out some new colors. The first thing you do is take a small dish with some water. I used an itty-bitty tuperware container I didn't care about. Open up all the polishes you want to use. Start with one color, let a drip fall into the water. It will spread out over the water. It looks really cool! Then drop the next color in the same spot, and the next. It will look like this: 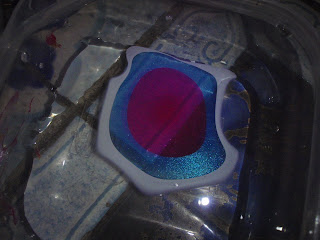 Keep going, alternating your colors, until they can't spread anymore. The middle circles will get smaller and smaller: 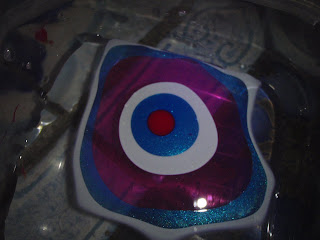 Next, I used a toothpick, and pulled it through the polish in one direction and then the opposite to get the marble look: 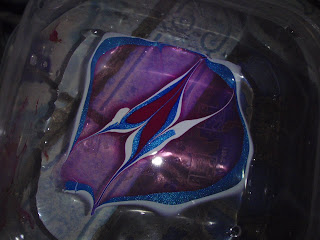 Now you need that on your nail. So place it in the water with your nail down and your palm up. Let it set for a sec, and then slowly pull your nail out, while using your marbling tool to keep the rest of the polish in the dish. I didn't try to keep the rest in the dish, and it all wants to pick up and go with you because it's all one sheet of polish. It wouldn't have been so bad, but I got a goofy, stringy drip down the middle and it would have looked perfect if it wasn't for that: 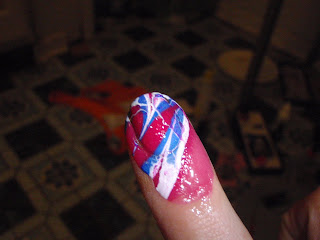 Clean up the stray polish with some remover, and she's all set! 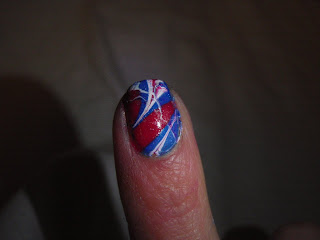 This is soooo fun to do. It reminds me of when I worked in a cake bakery and had to make marble cakes. That was my favorite! Swirling the different batter together was so pretty. I was itching for more when my boyfriend suggested putting the nail in face up and coming at the design from under the polish. That worked out okay, probably a fine method if you practice it. You just have to make sure the water is deep enough, and you can find a way in without disturbing the work floating on top. I don't think we need to see the nails I did, (cuz they're not great) but I at least have to put up the polish in the dish. I used my Romantiques: Harmony, Passion and Adore. Warning: It's the coolest thing you've ever seen. 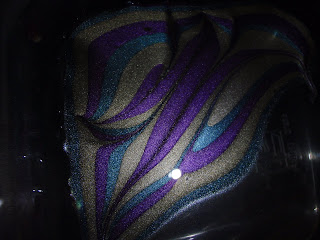 Posted by Lacquer Laine at 7:28 PM