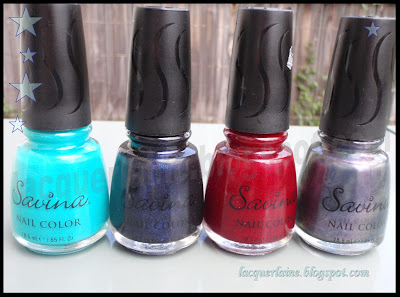 Marine Life, After Midnight, Ruby, Black Pearl
I went for a stroll into Nordstrom Rack one day to look for nail polish. The reasoning being that if Lippmann Collection, as well as other higher end lacquers are sold at Nordstrom, maybe they will be at Nordstrom Rack on sale. Well, I was wrong, but I found a brand I had never seen before: Savina. Most of the polishes were reminiscent of colors I have already seen. Marine Life above looked to me like China Glaze - Custom Kicks, Ruby looks exactly like China Glaze - Ruby Pumps, and so on. There was also a bright purple neon called Dream that looked just like Sinful Colors - Dream On. AND the bottles are the same as China Glaze except for that wavy little thing going on on the handle. Regardless, I bought some. 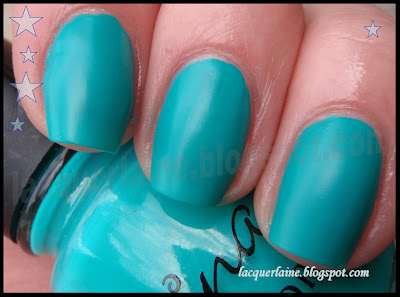 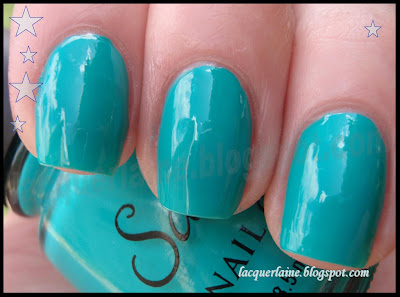 Marine Life - A bright blue-green creme that surprisingly, dried matte! Who would have thunk? Not me. I mean, it looked bright but certainly not neon. I went ahead and slapped on a topcoat so you could see it shiny! 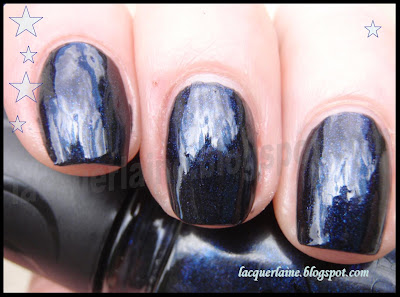 After Midnight - Dark blue shimmer. I bought this because I do not own any navy polishes!! I think I had this notion that I didn't like them on myself. I was wrong!! I love this. Ruby - Bright Red glitter. Seriously, this looks an awful lot like China Glaze - Ruby Pumps. Not the worst thing ever!! Who doesn't like a red glitter?! 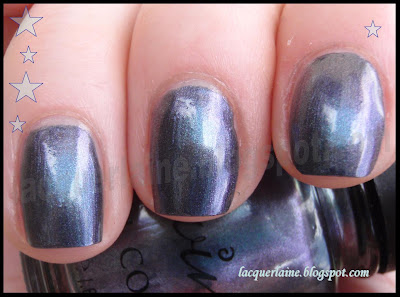 Black Pearl - Grayed purple-blue with a green-blue duochrome. This one, at least, did not remind me of any other color. Big fan of this one. Hence why I saved it for last! The girl who checked me out said she had it and loved it and gets compliments on it all the time. I can see why... it's stunning!
Posted by Lacquer Laine at 10:15 AM